Zoroastrianism: An Ancient Religion In A Modern World

Zoroastrianism: An Ancient Religion In A Modern World

Zoroastrianism was founded 3,500 years ago by an Iranian prophet called Zoroaster whose teachings challenged the traditions of Indo-Iranian religion and started a movement that evolved into the dominant religion in Ancient Persia.

At that time, Persia embraced a polytheistic faith that worshipped a pantheon of gods led by Ahura Mazda, which translates to “Wise Lord”.

Unhappy about the state of religion then, Zoroaster went into 10 years of meditation, during which he saw a shining being called Vohu Manah, meaning “Good Mind” leading him into the very presence of one God, Ahura Mazda.

This was the first of a series of visions, the revelations of which formed the foundation of Zoroastrianism.

Having had his eyes opened, Zoroaster preached the God in his visions as one who is omnipotent, omniscient and omnipresent, the creator of all that we know – thus introducing a monotheistic religious culture to the region.

The Zoroastrian faith grew in Persia, becoming one of the most important religions in the ancient world. But when the Persian empire was overthrown, Zoroastrians had to flee the land and were dispersed.

Today, there are about 120,000 practising Zoroastrians in the world. Around 350 call Singapore home.

While Zoroastrians believe that there is only one God, humans are constantly faced with the dualism that is inherent in the religion.

It is evident in the ongoing cosmic battle between Ahura Mazda, the creative force, and Angra Mainyu, the destructive energy – two opposing forces in the biggest clash of the universe. God himself had created a world that was pure in every way, but with Angra Mainyu’s attacks, it has become imperfect, with problems such as sickness, ageing and natural disasters.

Another exercise in dualism is the face-off between good and evil in the mind. Ahura Mazda has given people free will to choose between following the path of righteousness and the path of deceit, the consequence of which determines their final destination in heaven or hell.

The essence of the Zoroastrian way of life is captured by the three words: Humata, Hukta, Huvarstha, which mean “Good Thoughts, Good Words, Good Deeds”.

These words are regarded as the religion’s three-fold motto, which is represented in the most well-known symbol of Zoroastrianism – the Faravahar. It features a bearded man with one hand reaching forward while the other holds a ring. Around the man are a pair of wings with three layers of feathers, each standing for one of the three pillars of Good Thoughts, Good Words and Good Deeds.

Zoroastrians strive towards these ideals by engaging in charity work, believing in the spiritual equality of men and women, and doing good without hoping for any reward.

To learn more about their faith, Zoroastrians study their holy book known as the Avesta. 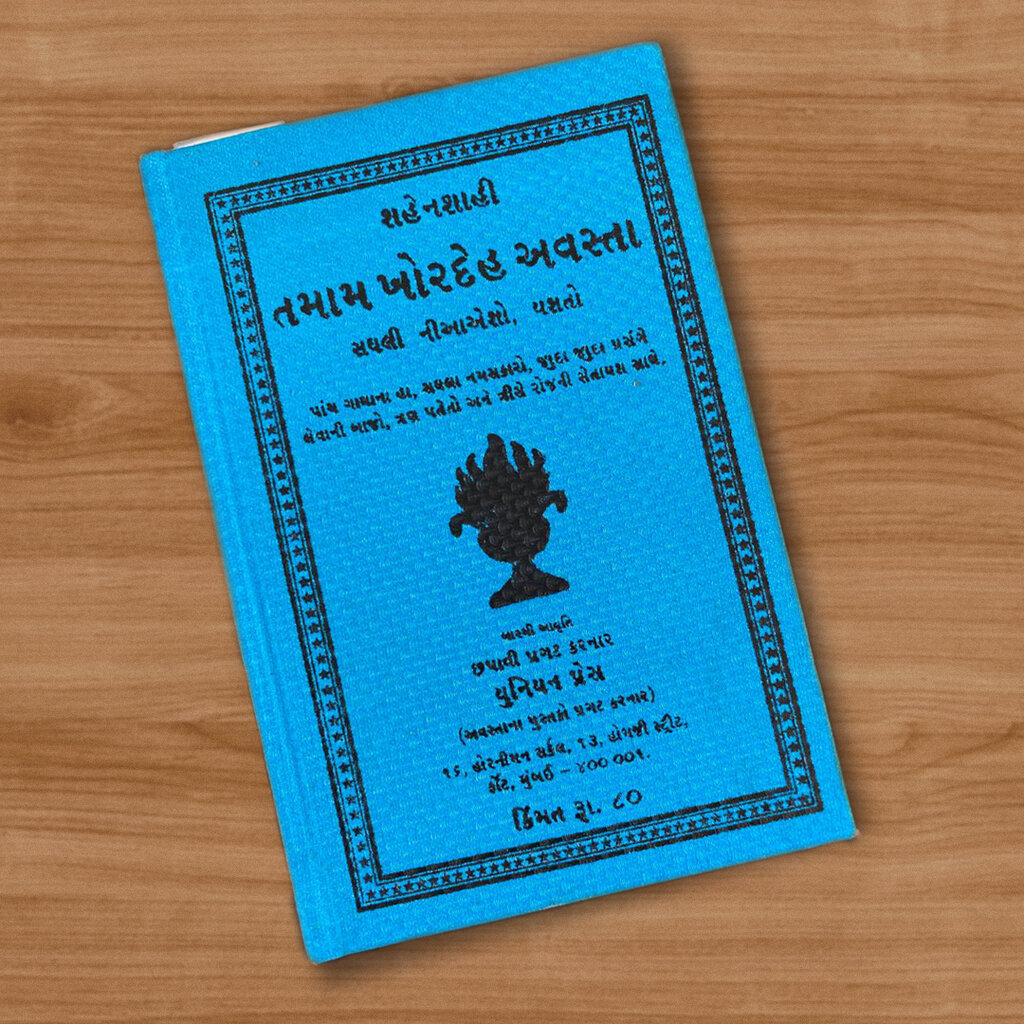 Avesta, the holy book of the Zoroastrians

Prayers and sacred ceremonies are conducted at the Zoroastrian place of worship, called a fire temple, where a fire is kept burning day and night. As Zoroastrians believe that fire represents God’s wisdom, they always turn towards a flame or light when they worship.

In the absence of a fire temple, as in the case of Singapore, worship can be conducted in private homes or other non-consecrated private buildings, led by an ordained priest. 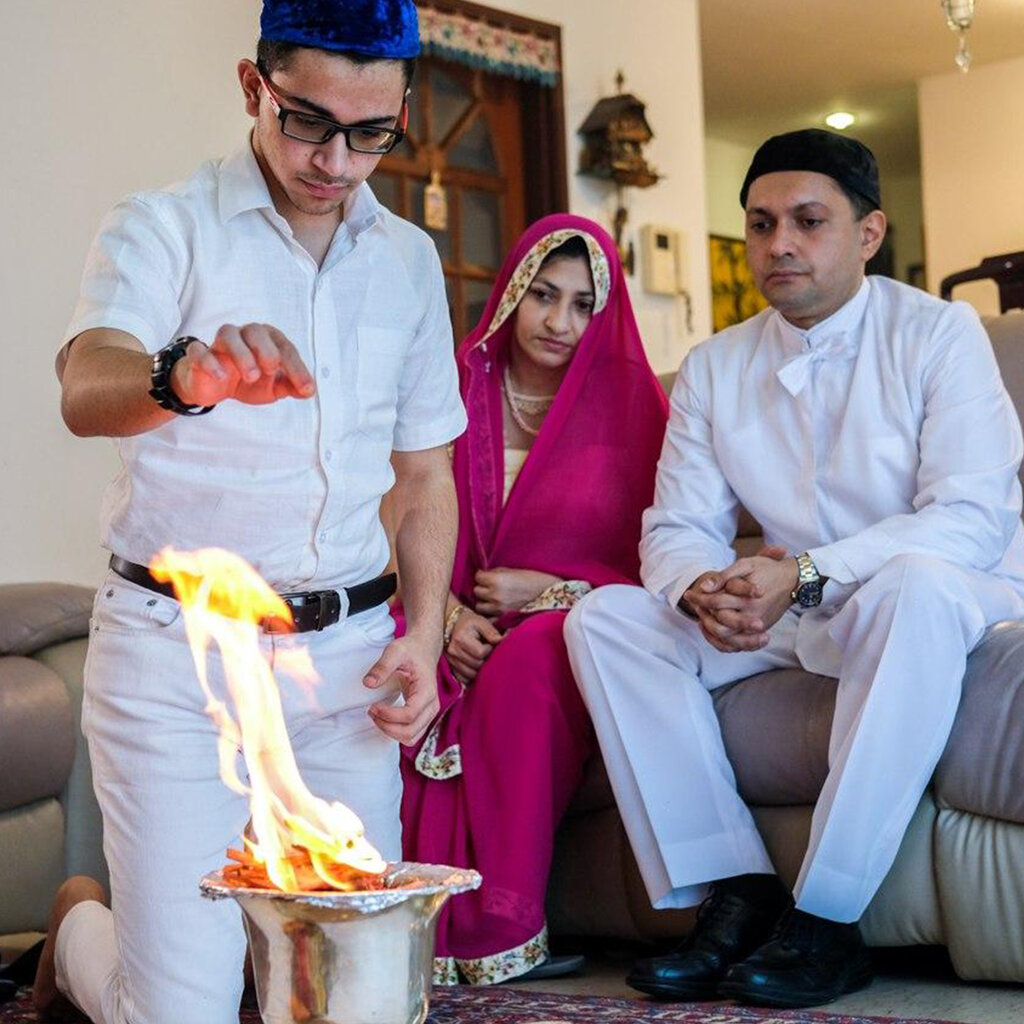 Fire represents God’s wisdom, which is why Zoroastrians always turn towards a flame or light when they worship.

Major Events in the Zoroastrian Calendar

An important ceremony is the Navjote, meaning “new follower”, which marks one’s initiation into the Zoroastrian faith, usually around the age of seven.

During the ceremony, each new member dons a vest called the sudreh.

The sudreh is thought to be a sacred garment that protects the wearer from evil, which is why a Zoroastrian is never without it. The usual practice is to wear it under regular clothes, and only take it off when showering.

This special vest is created using a single piece of pure white muslin cloth. It features a pocket in the front, where good deeds are said to be collected, and another at the back, where bad deeds are taken away to.

Also worn at the Navjote is the kusti, a sacred girdle that is made using 72 woollen threads to represent the 72 chapters in the Yasna, the main section of the Avesta. The kusti is to be tied three times around the sudreh as a reminder to think good thoughts, speak good words and perform good deeds.

The Navroze, translating to “new day”, is a joyful festival that celebrates the beginning of the Zoroastrian new year. On that day, which coincides with the start of the spring equinox, Zoroastrians greet each other with a hearty “Navroz Mubarak!”

As the occasion is all about new beginnings, Zoroastrians spring-clean their houses and fix broken things to symbolise a new start. They also dress up in their traditional attire and prepare the signature food of the season.

A visit to the fire temple is a must. There, Zoroastrians present their offering of fruits, sandalwood, milk and flowers.

The Navroze is celebrated twice a year in Singapore – in March and August – following the Persian calendar and the Shensahi, one of the Zoroastrian calendars.