Taoism: A Path Towards Good Fortune And Immortality

Taoism: A Path Towards Good Fortune And Immortality

Taoism, or Daoism, is the indigenous religion of ancient China and has been in existence from around 4,700 years ago.

It gained widespread recognition from the advocacy of Lao Tzu, an ancient Chinese philosopher and writer who is the reputed author of the Dao De Jing.

Dao De Jing is the main text of Taoism and can be translated as “The Book of the Way and of Virtue”. It holds 81 chapters of beautiful, succinct writing that has greatly influenced traditional Chinese culture and philosophy.

The symbol of Taoism is the Tai Ji, which represents opposing energy forces – yin and yang – counterbalancing each other to achieve true harmony and unity.

In Taoism, everything revolves around the Dao. Followers are to learn the Dao, cultivate the Dao and practise the Dao.

Translated directly from the Chinese word, Dao means “path” or “way”. To Taoists, the Dao is thought of as an eternal element that is the life force of the universe, transcending time and space.

Because it is everlasting, Taoists believe that when they achieve the Dao, they will not only be able to lead a life of good fortune on earth, but also live on eternally in the heavenly realms, achieving immortality.

Although the Dao cannot be seen, heard or touched, it manifests itself in the form of deities, such as the Three Pristine Ones, the Jade Emperor and the Golden Mother of the Jasper Lake.

Followers direct their worship at these deities at Taoist temples, where they recite scriptures and make offerings of five specific items at the altar – incense, flowers, water, lamp and fruits. They can also worship at home if they have set up altars at their residences.

It is believed that incense helps to communicate worshippers’ wishes to the deities, while flowers create a pleasant environment to express their sincerity. Water purifies the spirits of the netherworld and the lamp illuminates the path to the heavens. As for fruits, five different types are usually presented to represent the five elements of metal, wood, water, fire and earth.

Taoists also devote much attention to practising three virtues – compassion, frugality and humility – known as the “Three Treasures” in chapter 67 of the Dao De Jing.

To followers of Taoism, having compassion is a way of emulating the nature of the Dao. Taoists believe very much in doing good deeds to accumulate merit in their path towards bliss on earth and immortality.

The second treasure of frugality is a testament to the Taoist tradition of simplicity and avoidance of extravagance and waste, while the third – humility – comes from a peaceful heart intent on living harmoniously with others, without the need to outshine anyone.

Through seeking these treasures, Taoists make progress in their spiritual journey, gaining a deeper understanding of the Dao.

Major Events in the Taoist Calendar

According to a 2020 census, Taoists make up 8.8% of Singapore’s population. Some of the major festivals that they observe are Taoist Day, Zhong Yuan Jie and the Nine Emperor Gods Festival.

The fifteenth day of the second lunar month is a big celebration for Taoists all over the world as they commemorate the divine birthday of Lao Tzu, the founder of Taoism and author of the Dao De Jing.

On this day, a grand religious ceremony is held, where Taoist leaders and groups lead in the reading of scriptures, chanting, and the sending of petitions to the Three Pristine Ones, the most highly revered deities in Taoism.

In line with the first treasure of compassion, the commemoration usually includes elements of charity, such as free meals for the elderly and red packets for the less privileged.

Come the fifteenth day of the seventh lunar month, Taoists observe Zhong Yuan Jie, which marks the birthday of the Earth Official, who descends to the mortal world on this day to make a record of the good and bad deeds of each human being.

On this occasion, altars are set up at temples for priests to recite scriptures and perform salvation rites for mankind.

Throughout the seventh lunar month, spirits leave the netherworld to be judged for their sins. During this time, devotees take part in rituals to seek the Earth Official’s mercy, requesting for the pardon of their ancestors’ sins so that the latter can reach the heavenly realms. 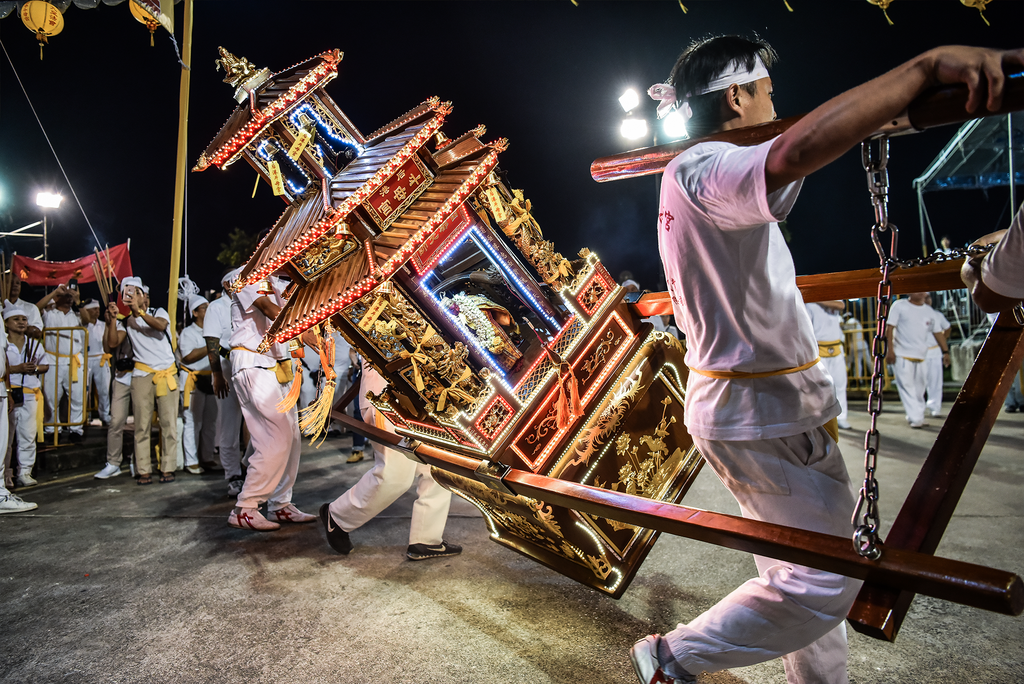 It begins with the raising of the jiu qu deng, an oil lamp with nine wicks, to invite divinities to the festival celebration. On the same day, a procession is sent from the temple to a nearby river or sea to invite the spirits of the Nine Emperor Gods to descend into a sacred urn.

During the festival, worshippers visit temples with offerings to ask the Nine Emperor Gods to bless them with wealth and longevity.

The festival ends with the urn being brought in a procession back to where the Nine Emperor Gods first arrived. The jiu qu deng is lowered the next day.