The literal translation of a “Sikh” is a “learner, student or disciple” or “seeker”.

Sikhism teaches that there is only one God, who is formless, fearless and is the Supreme Creator of the Universe.

So although Sikhs may be seen to be at different stages on this learning path, their ultimate goal is to have their soul unite with God.

The Sikh way of life was founded by Sri Guru Nanak Dev Ji, the first of 10 Gurus who manifested themselves in the human form. Each of them taught and advocated values that form the bedrock of Sikhism, with its basic tenets including the equality of mankind – regardless of gender, income, social status, caste, creed or religion.

After the first to the ninth Sikh Gurus inculcated the values of equality, respect, devotion, service, compassion, honesty and courage into the Sikh way of life, the tenth Sikh Guru, Sri Guru Gobind Singh Ji, built upon these and then provided Sikhs with a formal code of conduct by initiating them into the Khalsa (brotherhood of the pure).

Social and gender discrimination was rejected when the Guru also conferred the common surname of Kaur (princess) and Singh (lion) to the female and male members of the Khalsa respectively, reducing the associations with caste.

The emphasis on equality is until today a core part of the Sikh ethos and principles. For instance, in a Gurdwara (Sikh place of worship, which literally translated means “Guru’s Door”) anyone from any religious, caste or socio-economic background is welcome.

Anyone who visits a Gurdwara will also have to sit together on the same level in the congregation with everyone else regardless of his or her social status. They will also partake in the langar (free kitchen) seated together. These practices aim to remind Sikhs of the importance of equality of all mankind and even heads of state, royalty, and other VIPs are subject to this.

Hoisted at every Gurdwara is a flag known as the Nishan Sahib. It symbolises refuge, comfort, and food for anyone in need of help. 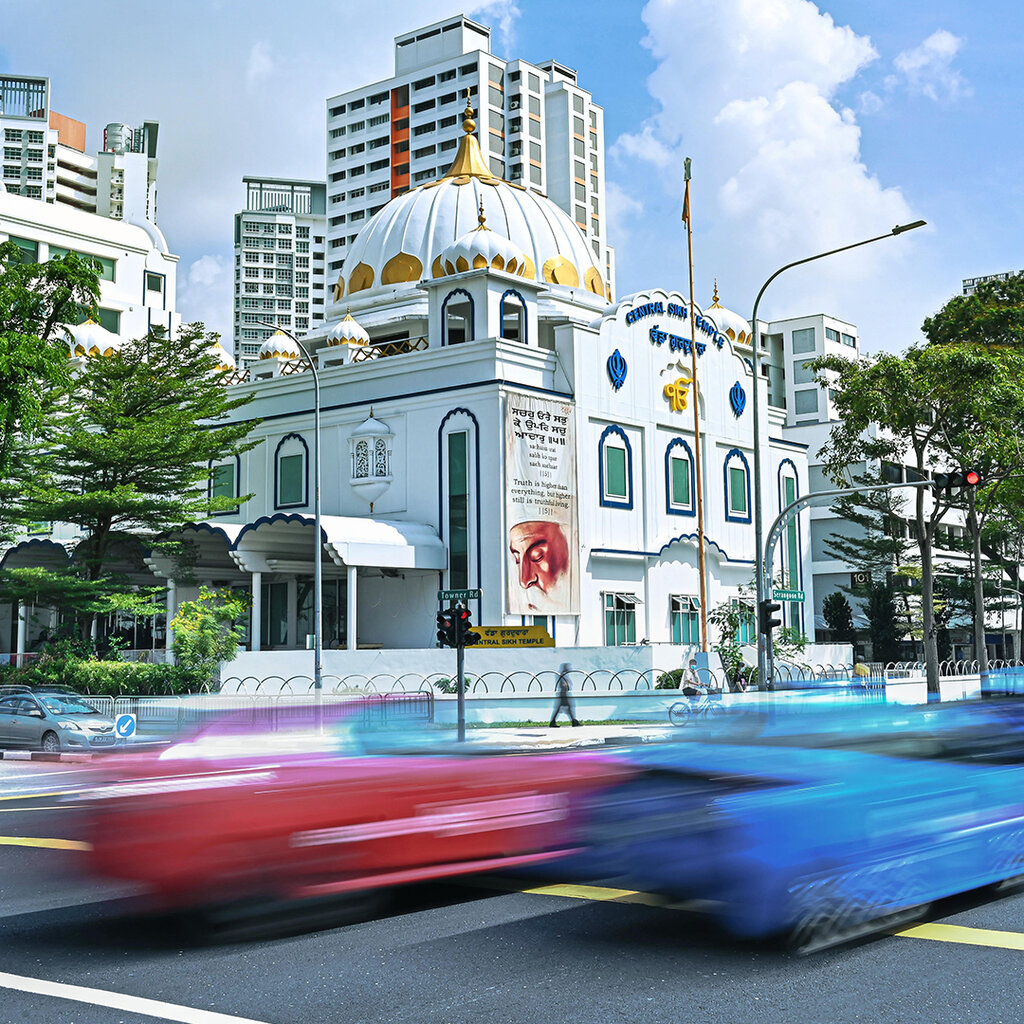 The picture above is the Central Sikh Temple on Towner Road. The saffron-coloured Nishan Sahib stands tall and visible from the main road.

Any Sikh, whether male or female, can lead in the prayer service and the recitation of Gurbani (sacred verses) from the Sri Guru Granth Sahib Ji, Sikhism’s eternal Guru.

The first is to meditate on or always remember God’s name, through devotional practices such as praying, singing of praises and studying the holy scriptures, which provides guidance on how to live in this world.

The second principle requires Sikhs to earn an honest living, while the third exalts them to share their earnings and resources with others as an act of service to their community as well as society in general.

Balancing the dos, are the don’ts known as the “Five Thieves”. Sikhs are to beware of and live above the five inner vices of lust, uncontrolled anger, greed, attachment and ego, as guided by the Gurus.

Once Sikhs are baptized into the Khalsa through the Amrit Sanchar (initiation ceremony), they are to maintain a daily discipline of meditation and prayer, and also keep five instruments of faith (Kakkaars) with them at all times.

Each of these Kakkaars symbolise an aspect of the Sikh faith.

The first is Kesh, which means “unshorn hair”. Sikhs do not cut their hair as it represents living a simple life that is in sync with nature and reflects an acceptance and commitment of the Guru’s will and ideals.

Accompanying the Kesh, is the Kanga, a wooden comb that is kept tucked in their hair at all times and reminds them of the need for cleanliness and discipline.

The third Kakkaar is the Kirpan, or a small ceremonial sword. Traditionally, the Kirpan is a symbol to uphold justice and protect the weak.

Then, the Kara is a round iron bracelet that reflects the Sikh‘s view of God as eternal and infinite. Wearing it also reminds Sikhs to do good in all their undertakings.

Lastly, the Kachera (undershorts) is worn as a reminder of self-restraint and modesty. 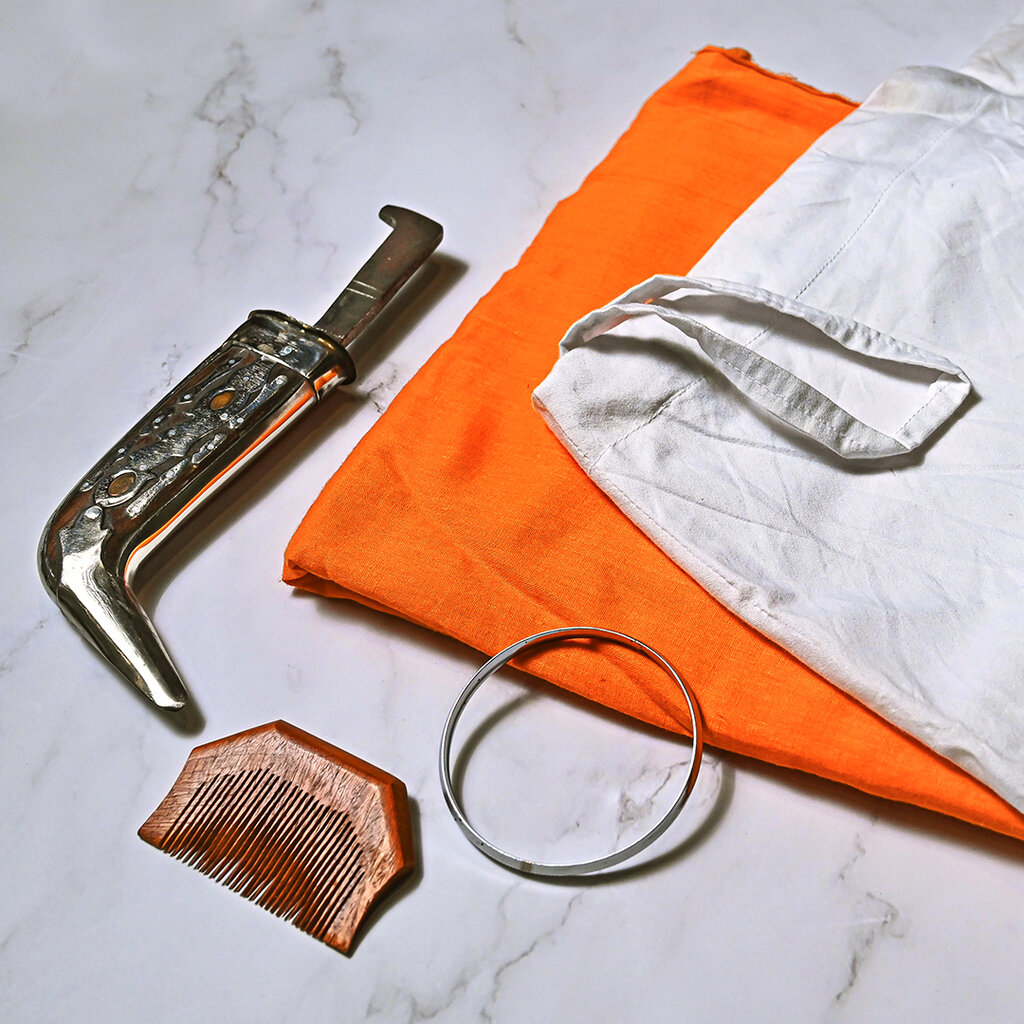 Major Events in the Sikh Calendar

They also celebrate Vesakhi in April. Vesakhi marks the day when Sri Guru Gobind Singh Ji created the Khalsa in 1699. Traditionally Sikhs mark Vesakhi through spiritual practices including, but not limited to, selfless service, devotion and congregating in the Gurdwara.

Sikhs also celebrate Bandhi Chhor Divas, which falls on the same day as Deepavali. Bandhi Chhor Divas celebrates the sixth Sikh guru, Guru Hargobind Sahib’s release from captivity by the Mughal empire. When Guru Hargobind Sahib Ji was informed of his release, he had asked for the freedom of 52 Hindu kings who were also held in captivity but was told that only those who managed to hold onto his cloak tail could leave. Outwitting the authorities, the Guru made a cloak with 52 cloth panels attached allowing all the kings to latch on to them thus saving them.

Besides these, every year Sikhs also celebrate the Parkash Dihara (birth anniversary), Jothi Jot (merging) and Gurgaddi Divas (Guruship day) of their Gurus, as well as the anniversary of the installation of the Sri Guru Granth Sahib Ji as their eternal Guru in 1708.