Buddhism: A Path To Overcome Suffering And Transcend Worldly Existence

Buddhism: A Path To Overcome Suffering And Transcend Worldly Existence

When Prince Siddhattha Gautama was young, he led a life of privilege in his kingdom located at the present-day Indian-Nepalese border, protected from all evidence of suffering.

Only when he was 29 years old, did he manage to step out of the palace. This led him to encounter four sights: an old man, a sick person, a dead body and a monk.

Realising that suffering exists, he decided to renounce mundane life to seek a spiritual path like the holy man that he saw.

However, despite meditating under the guidance of various teachers and following severe ascetic practices, Siddhattha could not find the answer to his quest.

He decided to take the path of moderation and avoid the extremes of self-indulgence and self-mortification. Sitting under a bodhi tree, he vowed to stay there until he attained enlightenment.

Forty days later, he emerged from under the tree fully enlightened. Having gained insight into the deepest workings of life and found the solution to suffering, he took on the title “Buddha”, which means “Awakened One”.

Thereafter, he travelled throughout India to share all that he has come to understand with people from all walks of life. His teachings form the basis of Buddhism.

Buddhism is a path of practice and spiritual development that leads to one’s ability to truly understand the ultimate reality.

Followers commit to Buddhism by taking refuge in the Triple Gem – the Buddha, the Dharma and the Sangha.

They seek shelter in Buddha because his example and what he preaches are reliable responses to life’s sufferings.

To follow Buddha’s path to enlightenment, it is essential to understand his teachings, which are collectively known as the Dharma.

Practising the Dharma requires the support of a spiritual community, referred to as “Sangha” in the Pali language. 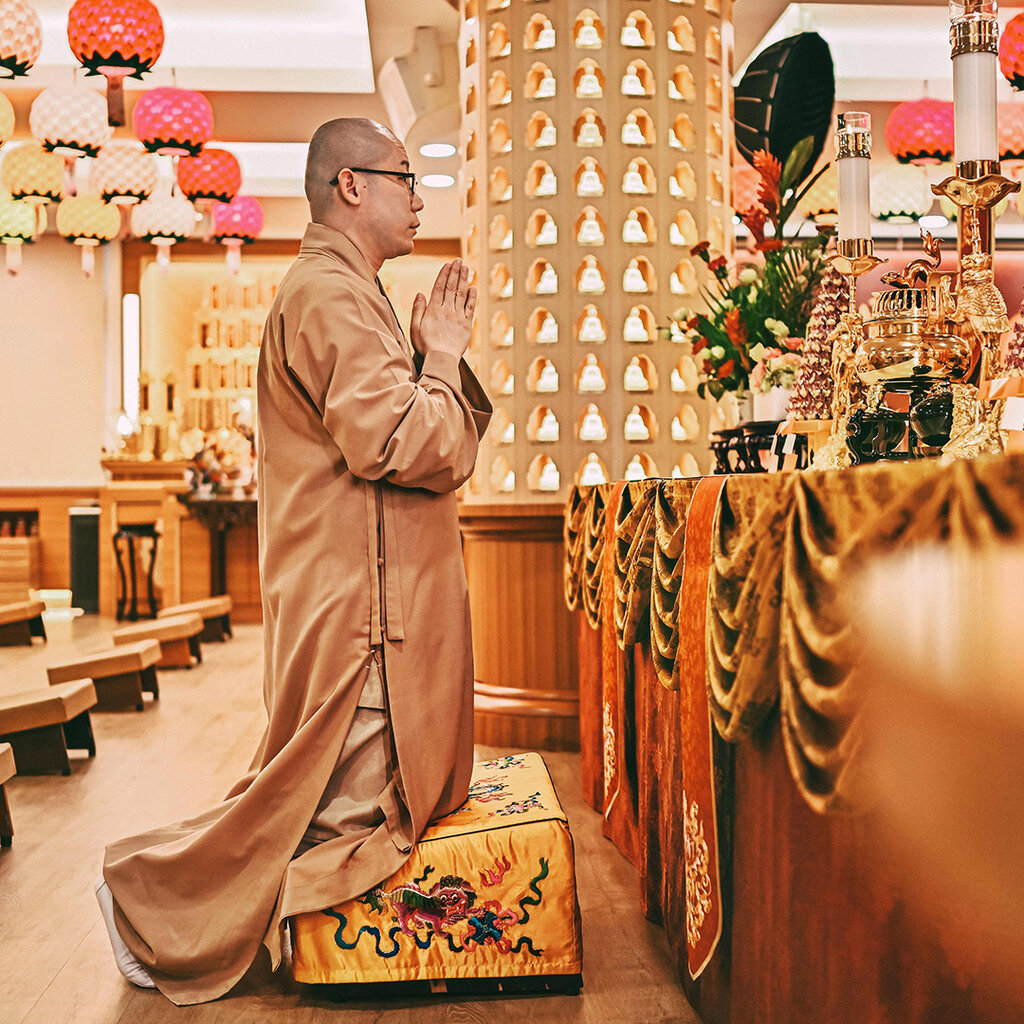 Venerable Shi You Wei, one of the youngest monks in Singapore is part of the Buddhist spiritual community known as the ‘Sangha’ .

Buddha’s foundational teachings start with the Four Noble Truths, the first of which posits that “there is dukkha”. “Dukkha” can be translated as “suffering” or “unsatisfactoriness”.

According to Buddha, suffering is an innate characteristic of human existence; we cannot find ultimate happiness in anything that we experience in this material world.

The Second Noble Truth states that “the cause of dukkha is tanha”. “Tanha” can be understood as “craving”, “desire” or “attachment”.

Our desire for things – which can be the enjoyment of sensual pleasures, the fulfilment of an ambition or even a wish to get rid of something – puts us at odds with the way life really is. Because nothing is permanent in life, having an attachment to the things of this world results in suffering.

The Fourth Noble Truth – “there is the path leading to the renouncement of tanha and cessation of dukkha” – points to the method of freeing oneself from life’s sufferings to attain true bliss. It is by following the Noble Eightfold Path of right view, right resolve, right speech, right conduct, right livelihood, right effort, right mindfulness and right concentration.

There are many facets to the practice of Buddhism.

Meditation is an essential aspect of Buddhism because it is a form of mental development and training. While we have no control over many things in life, we can determine how we respond to life’s situations. By cultivating a calm and insightful state of mind, practitioners can arrive at a new understanding of the reality of things.

Another priority is the studying of the Dharma. Besides reflecting on the Dharma individually, some Buddhists also attend lessons, talks or join study groups to learn together with others.

Followers of Buddhism also show their devotion through ceremonies and rituals.

Buddhist ceremonies comprise three main elements: chanting – the recitation of verses that express the ideals of Buddhism, prostration to pay respect to the Triple Gem and seek repentance, and merit-making through the making of offerings that usually include flowers, candles and incense. 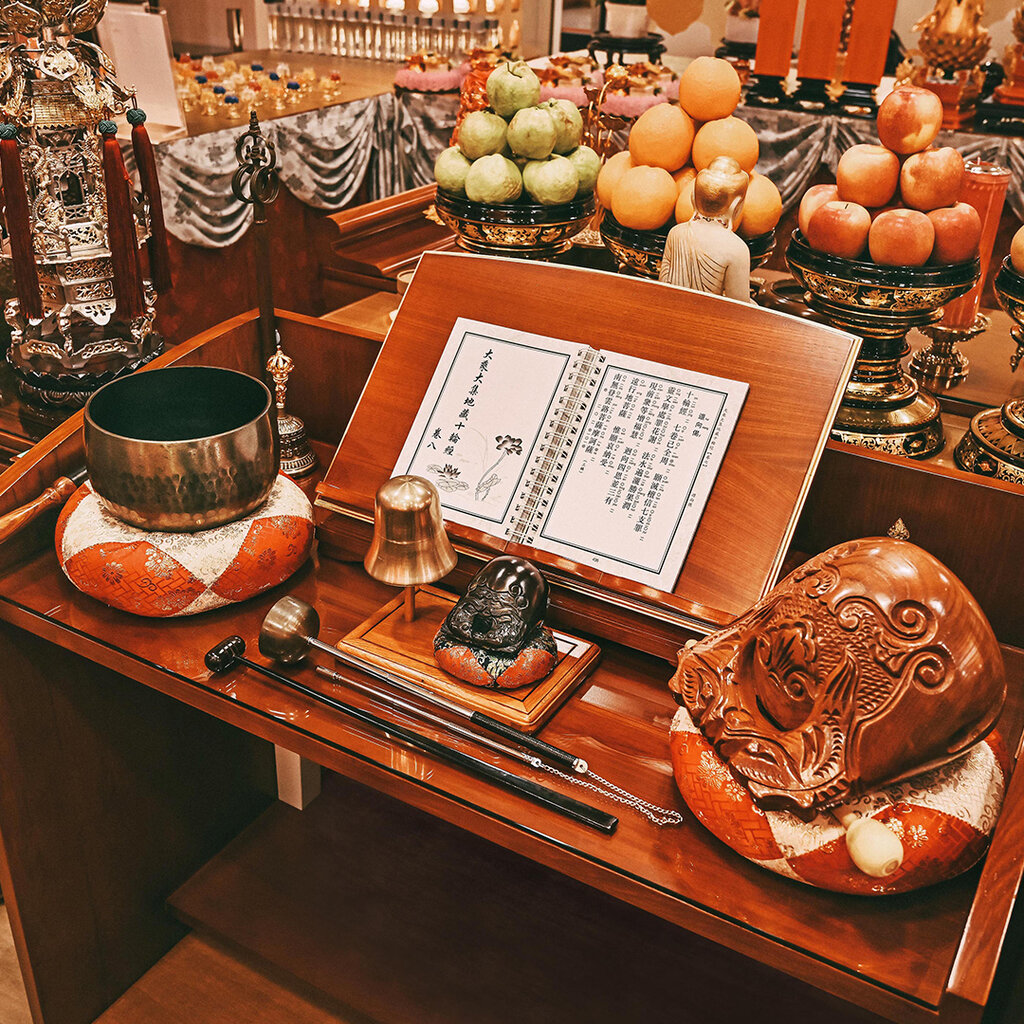 Lay-Buddhists also follow a code of ethics known as the Five Precepts – a call for devotees to refrain from killing, stealing, sexual misconduct, false speech, and taking intoxicants that cloud the mind.

As a nod to the first precept of not taking life, some Buddhists are vegetarians while others adopt a vegetarian diet on the first and fifteenth day of each lunar month.

The Most Important Event in the Buddhist Calendar

Buddhism has the largest following among all the religions in Singapore, with 31.1%1 of the population professing to be Buddhists.

Vesak Day is the most important festival in the Buddhist calendar.

On this day, which occurs on the first full moon of May, Buddhists in Singapore and worldwide celebrate the birth, enlightenment and nirvana of Buddha.

Devotees bring offerings of flowers, candles and joss sticks to the monastery, where the ritual of bathing the statue of the baby Prince Siddharttha is carried out. 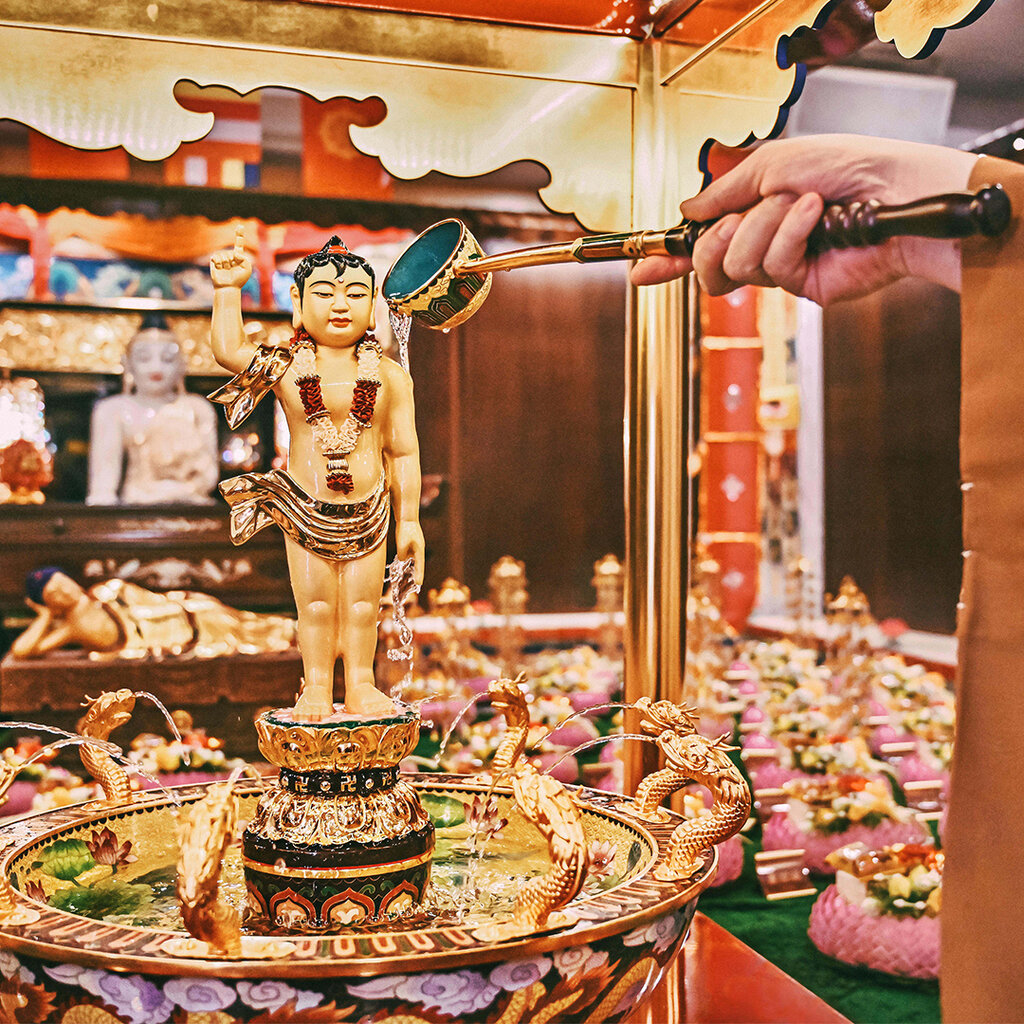 *During Vesak Day, some Buddhists bathe the statue of the baby Prince Siddhartha, as it represents the cleansing of their spirituality. *

Much of the day revolves around performing good deeds, such as giving financially to the monastery and the Sangha, supporting social welfare needs and donating blood.

In the evening, candlelight processions are held, and the ceremony of “three-step, one-bow” is practised at some monasteries.