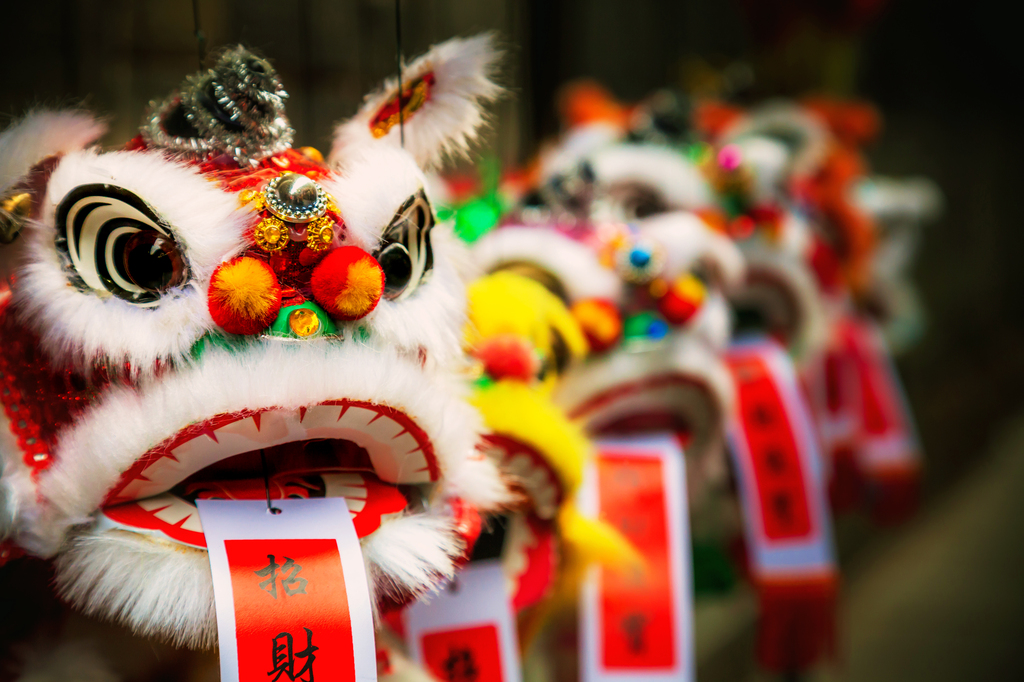 Chinese New Year is a 15-day celebration that starts on the first day of the Lunar calendar and ends on the fifteenth. Because of this, it is also known as Lunar New Year.

Marked by lion dance performances with thunderous drum beats, the lighting of firecrackers and generous splashes of the colour red, Chinese New Year is traditionally celebrated in a roaring, vibrant manner. These practices find their roots in the ancient legend of the mythical beast called the Nian (年).

According to folklore, on the eve of every Chinese New Year, the Nian would descend upon the nearby village and devour livestock and villagers. On one particular Chinese New Year’s Eve, an old man came to the village and frightened away the Nian with loud sounds from drums and firecrackers, bright lights and the colour red, all of which the Nian was said to be afraid of.

As time passed, more customs and practices have come to be associated with the celebration of Chinese New Year.

Before the term “decluttering” became trendy in recent times, there was spring cleaning. It is a well-known practice and typically involves cleaning the house, sweeping away dirt and removing unwanted items right before Chinese New Year. But what is little-known is that it started as an exorcism ritual to expel illnesses. Over time, it has evolved into the modern activity of spring cleaning. And as much as most would love to keep their house clean throughout the festival, it is considered bad luck to sweep the floor or tidy the house during Chinese New Year as it symbolises sweeping away one’s wealth. Leading up to Chinese New Year, it is a common practice to put up chun lian (春联), spring couplets of auspicious characters.

When it comes to Chinese New Year goodies, there are some delights that have found their way into the hearts of many Singaporeans. A Chinese New Year celebration is hardly complete without feasting on pineapple tarts, love letters and barbecued pork slices (bak kwa). These snacks have significant meanings as well. Pineapple, also called Ong Lai in Hokkien means the “coming of fortune”. In olden times, love letters were used by lovers to communicate messages of affection and the consumption of this pastry would symbolise that the words are taken to heart. The red colour of bak kwa represents good luck. This explains why it is common to find them, alongside other flavourful goodies, in almost every home during the festival. 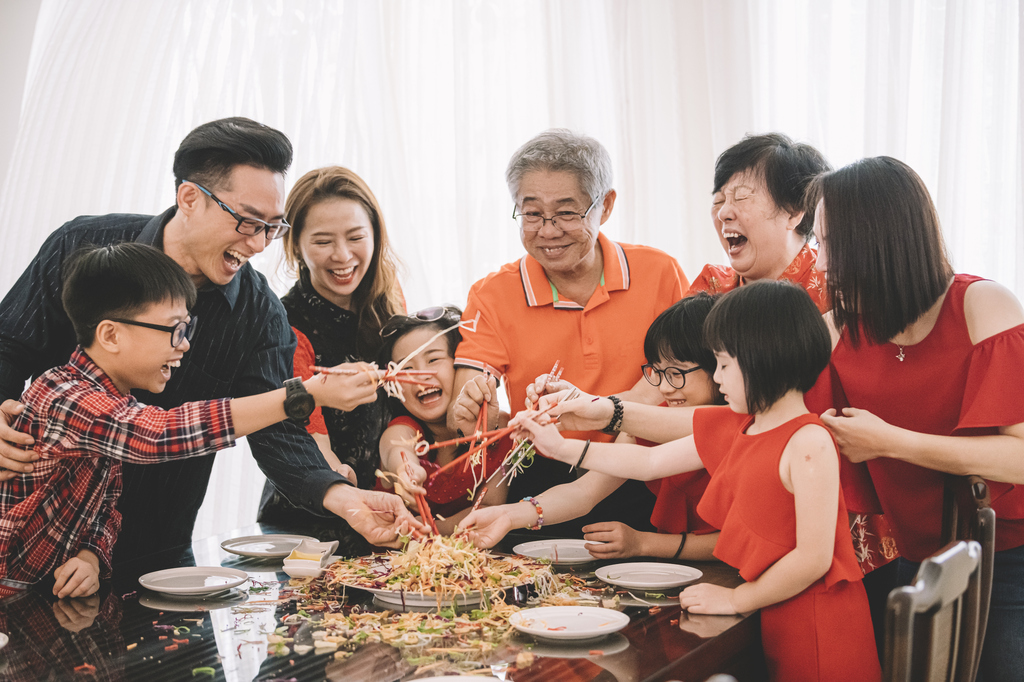 On the eve of Chinese New Year, families get together, also known as Tuan Yuan (团圆), which means “gathering around the family hearth” as a show of family solidarity. After the meal, it is a tradition for family members to Shou Ye (守夜), meaning to stay up past midnight as this is believed to delay ageing and increase life expectancy for the elders. 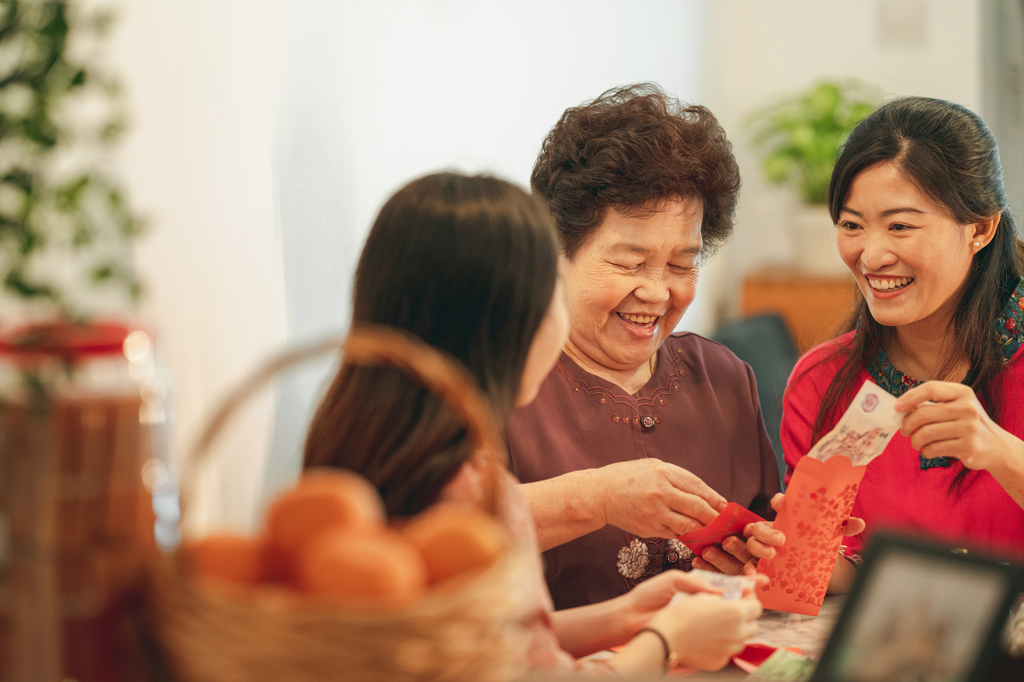 The first day of the Chinese New Year, which is called Yuan Dan (元旦), is one of the most anticipated days of the festival. To celebrate this new beginning, Chinese don new clothes in bright colours when they go house visiting.

But before that, children first pay respects to their parents with a pair of Mandarin oranges as even numbers signify happy events and Mandarin oranges represent gold (the word is pronounced as “gam” in Cantonese). They also greet their parents with meaningful phrases such as xin nian kuai le (新年快乐) and shen ti jian kang (身体健康), meaning happy new year and good health. As a token of good wishes, parents hand out Hongbaos (red packets containing money) to them. Married adults also practise this custom of giving out Hongbaos to the young.

On this day, it is customary for families to visit their close relatives with priority given to the home of the most senior member of the extended family. Over the next fourteen days of the Chinese New Year celebration, house visiting is extended to the residences of friends and acquaintances as well. The only exception is the third day as it is considered inauspicious.

Celebrating Other Days with Special Significance

Chinese mythology has it that humans were created by the goddess Nuwa on the seventh day after the creation of the world. Known as Ren Ri (人日), this day is regarded as the common birthday of mankind. Chinese all over the world celebrate this day by eating symbolic foods.

In Singapore and Malaysia, the practice is to Lo Hei (捞起) or Lou Hei Yu Sheng (捞起魚生)—the tossing of raw fish salad. Created by four chefs known as the ‘Four Heavenly Culinary Kings of Singapore’, this dish has become synonymous with Chinese New Year celebration. The tossing of Yu Sheng is accompanied by auspicious sayings and a roaring “Huat ah!” at the end.

While much emphasis is placed on the start of the Chinese New Year, the last day has just as much significance as the first day. Yuan Xiao Jie (元宵节), also known as Chap Goh Mei (Hokkien) is the fifteenth day of the Lunar New Year and marks the first full moon of the new year. The words “yuan xiao” mean “first night”, and refer to the first night of the year with a full moon.

On this day, glutinous rice flour balls, also known as tangyuan (汤圆) are eaten. The round shape and pronunciation of tangyuan (tuan tuan yuan yuan 团团圆圆) symbolise wholeness and togetherness of the family, which is why it is also served on other festive occasions such as Winter Solstice.

In Singapore, the first and second days of Chinese New Year are public holidays. This gives the Chinese community the time and opportunity to celebrate with their families and friends.

On top of familial celebrations, the festival is commemorated with great fanfare throughout the island. There is a sense of festive mood in the weeks leading up to Chinese New Year. Elaborate decorations in bright colours are put up in homes, offices, malls and public spaces with colourful sculptures and lanterns lining up the streets of Chinatown.

One highlight is the annual Chinese New Year Bazaar in Chinatown. Every year, it attracts huge crowds and visitors can buy popular items such as couplets, flowers and festive goodies.

Another highlight is the River Hongbao. Started in 1987, this annual event has become a must do tradition for locals and tourists. Visitors are treated to a showcase of cultural display and performances from local and international talents.

Lastly, the evening-to-night Chingay Parade is a uniquely Singaporean tradition and is usually held on the second week of the Chinese New Year. Celebrated by Singaporeans of different races, audiences can expect a marvel of dazzling floats, dragon dance and lively multi-ethnic performances.